The Huni Kuĩ, or Huni Kuin, are an indigenous people of the Amazon Basin, speakers of a language known as Hãtxa Kuĩ – part of the Pano linguistic branch. Their traditional territories are located across the borders of Brazil and Peru. On the Brazilian side, the Huni Kuĩ live in the state of Acre, on 12 indigenous lands in the Purus, Envira, Murú, Humaitá, Tarauacá, Jordão and Breu rivers, with an estimated population of approximately 7900 individuals, constituting 45% of the total indigenous population of the state (Iglesias, 2014, p.20). Of the total Huni Kuĩ, 67% live in 10 lands in the valley of the Tarauacá river, a tributary of the Juruá river. There are also a considerable number of families living today in the cities of Santa Rosa, Tarauacá, Jordão, Feijó and the capital, Rio Branco. In Peruvian territory, a little more than 2,100 Huni Kuĩ (according to an official census in 2007) live in 11 native communities officially recognized in the upper Purus River and in the Curanja River (idem, p. 20).

The ethnonym “Kaxinawá” is often used in anthropological literature and government policies to designate the Huni Kuĩ, and can be translated as “bat people” or “vampire men” (Tastevin, 1925, p. 10). Erikson (1992, p. 242) points out that, in general, the Pano peoples refuse the designation by which they are known, either because of their exogenous aspect (i.e., usually imposed by a neighboring group), or because of their pejorative aspect. When referring to themselves, almost all Pano use the name Huni Kuĩ, with small variations in the spelling: honi kon, uni koi, etc. (Keifenheim, 1990, p. 80). The term huni and its correlates honi and uni are translated as “man” in the sense of “being human” (Keifenheim, 1990 apud Yano, 2009, p. 36). Kuĩ [1] is a term often translated as “true” – although such a translation is criticized by some scholars working with Pano peoples. Thus, the most current translations for “Huni Kuĩ” are “true people” or “true men”. Such translations, as mentioned, should be problematized, since, according to Keifenheim (1990), the term Kuĩ refers to the endogenous nucleus of the group in question; Thus, the term “Huni Kuĩ” expresses the idea of ​​”our people” and is embedded in a relational dynamic that takes into account, above all, the position of the one to whom it is addressed (Yano, 2009, p. 36) way of being, exemplary to the group. As Viveiros de Castro (2002, p. 372) warns in analyzing the notion of humanity in indigenous thought, it is necessary to consider that collective self-designations that identify “people” mean “people,” not “members of the human species.” That is, such designations are personal pronouns, recording the point of view of the subject who is speaking, not proper names.

Although the expression Huni Kuĩ (and its linguistic variables) is used as a self-designation among various Pano peoples, Calavia Sáez (2000, p. 24) states that, in comparison with other groups, such as the Yaminawa or Shipibo, the specialized literature has given the Kaxinawá a discrete identity – ethnic, linguistic and cultural – and endowed with historical depth, so that, not by chance, they are the only one among the Pano peoples of the Acre region between the neighbors and the anthropologists that consecrated the use of a self-denomination, Huni Kuĩ (ibid.). The anthropologist Ingrid Weber (2006, 53) also notes the growing demand for change of ethnicity by some Kaxinawá, especially in Acre, pointing out that the decision to change came from a group of teachers and leaderships, gaining more and more space in the indigenist environment.

Among the indigenous people in Acre, especially the researchers who have undergone training in teaching, indigenous licentiation or agroforestry, the conception and division of historical times in the so-called five times is recurrent. This is a history generally experienced by the indigenous peoples of Acre related to the process of colonization and syringe extraction. We can summarize the five times as follows:

1) Time of the huts: life in the villages before contact with the nawa (non-indigenous).

2) Time of the raids: invasion of the rubber tappers, war between the different ethnic groups and the colonizer.

3) Time of captivity: exploitation of indigenous labor in the rubber plantations, prohibition of festivals, rituals and speech in the indigenous language.

4) Time of rights: fight with the National State to achieve specific rights for indigenous peoples, such as demarcation of land. Emergence of indigenous cooperatives, indigenous schools, among others.

Xinã Bena is an expression in hãtxa kuĩ that can be translated as “new thought” and also used to designate the “new times”. This expression was used as a title of a film produced by Zezinho Yube (2006), in which the filmmaker recorded the daily life of the family of the pajé Agostinho who, together with his wife, remember the times of captivity in the rubber plantations and celebrate the new times, when, from the demarcation of the lands they were able to return to teach huni kuĩ practices and knowledge to the new generations. Related to this movement, xinã bena was also the expression chosen to name one of the huni kuĩ festivals, held every year since 2011, in the village of Lago Lindo, in the upper Rio Tarauacá region, near the municipality of Jordão.

In these new times some Huni Kuĩ emphasize the importance of alliances with other peoples in a movement of celebration and transformation of their knowledge. Thus, an important feature of xinã bena refers to the reconfiguration of the relations between the Huni Kuĩ and nawa (non-indigenous); being the young people central figures in the articulations of these new ways to relate. The recurring translation for the term xinã bena, which associates the ideas of ‘new times’ and ‘new thought’, brings the sense that these new times, the present times, are being constituted from the transformations of the ways of thinking.

The Huni Kuĩ, as well as other indigenous peoples of the region, make use of the so-called “medicines of the forest”. Among them, we highlight the nixi pae – also known as uni, ayahuasca, hoasca or daime. This is a tea prepared from Banisteriopis caapi (known as jagube, mariri or huni), from the leaf Psychotria viridis (known as chacrona, queen leaf or kawa) and boiled with water. Among the “medicines of the forest”, it is considered of great power. For the Huni Kuĩ, the nixi pae is considered a living spirit. In their descriptions, it’s always endowed with agency and intentionality, as well as with it’s own wisdom and intelligence.

Today, the term “medicines of the forest”, in the Huni Kuĩ case, encompasses other preparations in addition to the nixi pae: such as rapé, sananga, kampum and a series of plants used for bathing, swallowing, scrubbing, smelling, applying to the eyes, ears, tongue, among other modes of use. Such ones are made for the purposes of curing specific illnesses, malaise or, as the Huni Kuĩ say, take nisũ (panema, bad luck or dizziness) away. ‘Medicines’ can also be used in ritual practices aimed at strengthening the person and his/her learning through specific training diets, in which, in each case, they imply for the person to be restricted in a certain period of time of the ingestion of various types of food, such as meats and sweets, the practice of sexual relations, among others.

The kene and master of the drawings

Kene kuĩ is the name given to the system of graphic standards among the Huni Kuĩ. One of the translations pointed to the expression is “true drawing” or something close to “our drawing”. In their narratives, the Huni Kuĩ tell us that in ancient times these drawings were taught by the boa to a huni kuĩ woman, so they consider that women are the owners of the drawings, and can do them through different techniques, such as weaving in cotton, art in beads, wickerwork, painting them in ceramic pieces and in the body itself using natural pigments such as urucum and genipap. Older women, specialists in the arts of the kene are called aĩbu keneya, “woman with drawing,” or even “masters of the kene.” They play an important role in the training of the younger generation in drawing. One way to teach them is by using the bawe plant, the juice of which is squeezed by the older woman in the eyes of the young, as she chants praying (pakarin) that the forest beings will give the knowledge of the drawings to the apprentice. From the realization of this practice, huni kuin women tell us that it is possible to visualize the drawings during dreams and thus produce them easily in their various forms. 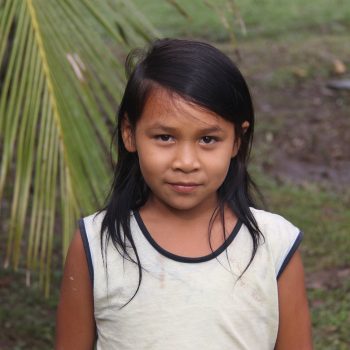 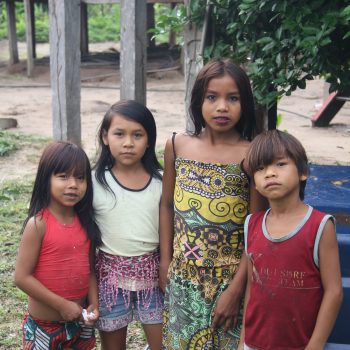 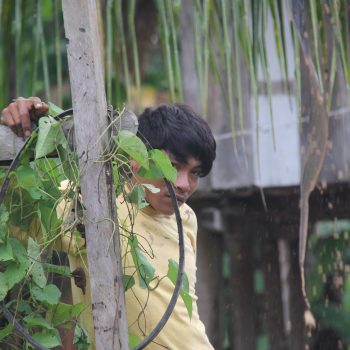 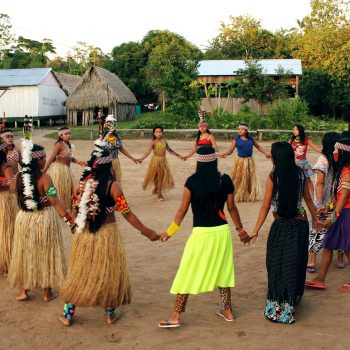 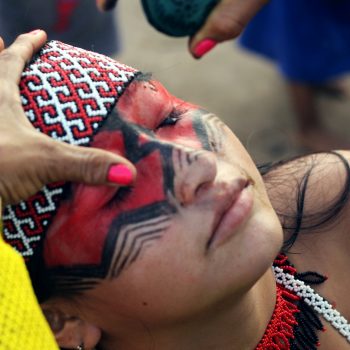 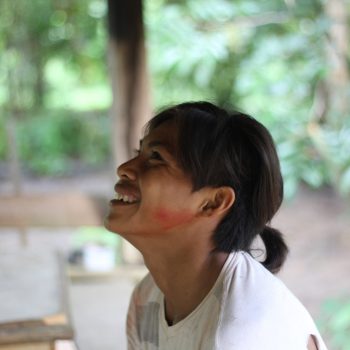